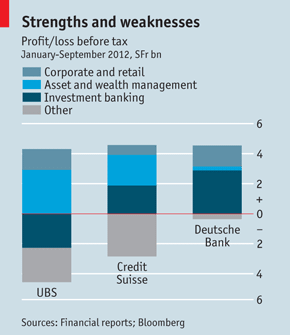 Imagine going to work on Monday morning to find yourself barred out of your own office with a “pink” slip waiting for you at reception. Unfortunately many traders at the London office of Swiss bank UBS found themselves in that position as up to ten thousand of their peers at Swiss bank UBS will be losing their jobs over the next couple of years.

UBS in its earnings report last week stressed on its focus on profitability with a focus on its wealth management and retail banking operations. Supposidly less risky business and more stable sources of revenue rather then some of the more ambitious trading operations. But one analyst rightly pointed this to “a public undressing” with a lot of unanswered questions.

Nevertheless shareholders rejoiced as the stock jumped 4% after the formal announcment and the promise to start paying at least 50% of its profits in dividends, after it reaches a certain ratio of capital to assets.

But can this drastic reorganization actually achieve the level of profits investors desire. The Economist article points out that if USB wants to achieve at least a 15% return on equity in the slimmer investment-banking division by next year; it would literally have to join the ranks of just one or two big investment banks that are actually achieving that today.

UBS no doubtingly has the best wealth management franchise in the industry. Question is will it be enough to sustain long-term profit growth?